Actin-rich pedestals are raised structures formed by actin polymerization of the host. The effector protein that plays a central role in pedestal formation by EPEC and EHEC is the 'translocated intimin receptor' (Tir) (4-6). Tir adopts a loop-like structure when inserted into the host cell plasma membrane, with the N and C termini of the protein facing the host cell cytoplasm. Following translocation, a bacterial adhesion protein, intimin, binds the loop of Tir that projects to the extracellular space, anchoring the bacterium firmly onto the apical surface of the host cell. The Tir-intimin interactions cause actin polymerization through different signaling mechanisms in EPEC and EHEC. In EPEC, the tyrosine residue at position 474 (Y474) located in the C-terminus of Tir is phosphorylated by the host kinases Fyn and Abl, resulting in the recruitment of the host adaptor protein NcK that binds directly to Tir. NcK then recruits and activates the host cell actin-promoting nucleating factor N-WASP, which in turn recruits and activates the Arp2/3 actin polymerizing complex (7).
In EHEC, the Tir tyrosine phosphorylation step is circumvented by the EHEC effector EspFu. EspFu interacts with IRTKS and IRSp53, two remodeling proteins in the host plasma membrane. Signaling is then initiated from the Asn-Pro-Tyr motif at the C-terminus of Tir, which recruits N-WASP and Arp2/3, leading to actin polymerization.
Apart from actin and actin-binding proteins, host cell adhesion proteins (e.g., vinculin, talin, alpha-actinin) are also localized at the actin-rich pedestals, raising the hypothesis that the pedestal is similar to adhesion plaques, like focal adhesions, podosomes or filopodia in mammals. Even more surprising, multiple components of the clathrin-mediated endocytic pathway have been found at actin pedestals (8-10). Nonetheless, despite extensive research, neither the precise mechanisms involved in pedestal biogenesis nor the functional significance of pedestals in the bacterium life is fully understood.  One possibility is that the actin-rich pedestal is generated as an anti-phagocytic mechanism that positions the microbe mostly extracellularly.  Another option is that the actin-rich pedestal functions as an adhesive platform that modulates bacterial adherence and dissemination during infection. 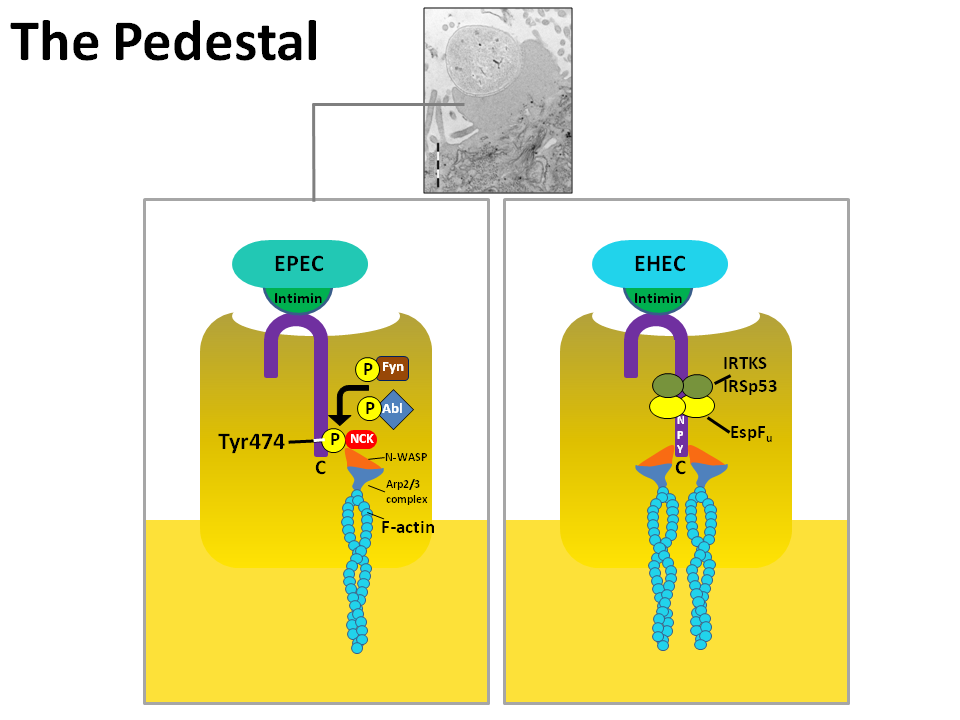 Open Questions:
•    How does cytoskeletal remodeling contribute to pedestal formation and shape?
•    How is Tir translocated into the host cell plasma membrane?
•    What role does the pedestal play in the microbe lifestyle?