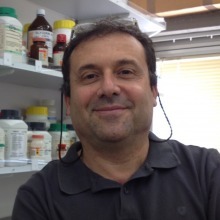 The Cell Biology of Infection

Welcome to our lab!

The cells that line our intestines ­­- the epithelial cells - are continuously bombarded with disease-causing microbes.  Two major such microbes, enteropathogenic E. coli (EPEC) and enterohemorrhagic E. coli (EHEC), are bacteria that infect epithelial cells of the human intestines causing acute diarrhea and gastroenteritis. Our lab is interested in exploring the mechanisms by which these important bacteria attack their epithelial hosts and cause disease. Disease-causing microbes are the best ‘cell biologists’ on the planet.They have co-evolved with their hosts over billions of years, during which they have optimally adapted themselves to them.Consequently, they have developed ingenious strategies to selectively modify proteins and lipids to gain control over specific molecular pathways of their hosts. A deep understanding of the ways by which disease-causing bacteria attack their host cells will lead not only to novel insights into fundamental questions related to the host-microbe relationship but also to the development of novel therapeutics aimed at combating life-threatening illnesses of the intestines.